Bird repellent gel and liquid taste aversions are an easy and quick option to solve bird nuisance for grass, turf, foliage, structures, and any other surfaces. These products provide simple and cost-effective for especially property management companies and property owners.

SafePRO® Bird Repellent liquid creates an invisible barrier that irritates birds’ trigeminal systems (similar to our sense of smell), for a harmless but potent effect. Directly apply to surfaces by painting or spraying liquid to repel birds from feeding, loitering, and landing.

After applying SafePRO® Bird Proof Gel, birds are not likely to land upon it. If they do land, they will find the sticky surface to be uncomfortable and won’t stay for long. They learn over time and do not return to the treated surfaces.

Birds are destructive to public and private facilities, any of which can lead to large financial losses. They halt operations and make repairs necessary by entangling themselves in machinery or downing power lines. They even nibble at, or even tear out insulation. 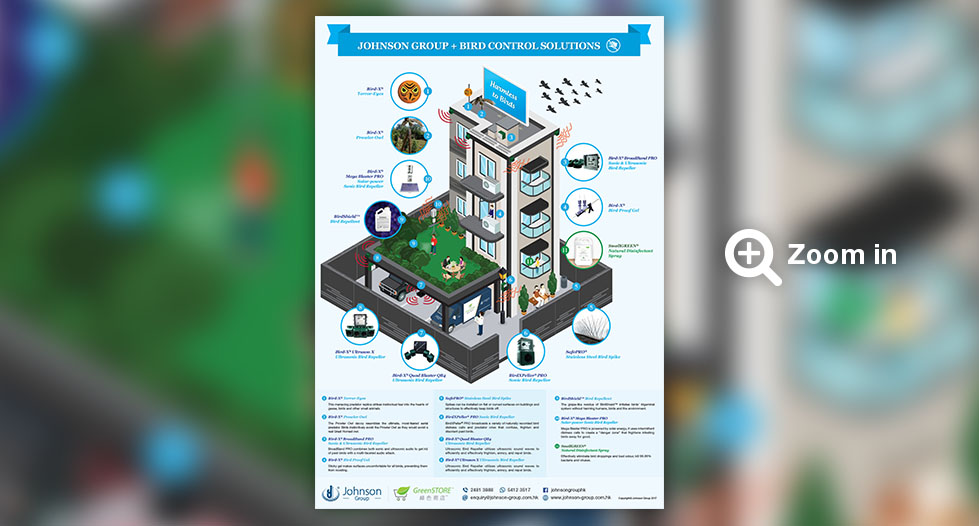 At the Johnson Group GreenSTORE™, you can acquire easily all effective, environmentally safe and non-toxic products. Free delivery to single location with purchase of HK$500 or above (Not including Discovery Bay and outlying islands, forbidden and remote area).

With our professional advice and effective products for birds control, those negative effects brought by birds can be limited. The products we provide are as follows:

Proper identification is very important as certain products are species-specific. Never underestimate the commitment of pest birds to return to their home.

The feral pigeon is generally blue-gray with a white rump; has iridescent feathers on head and neck; two broad black bars across each wing and a broad dark band across the end of the tail. They also can display white, brown or gray plumage.Repel pigeons with a vinyl inflatable predator by using helium frightens birds pests away! Huge 2-foot hanging ball has menacing, moving eyes on front and back that strike fear in birds!

The feral pigeon is the number one urban pest bird. Large numbers exist in every city across the country. Not a native bird, feral pigeons are descendants of domestic homing pigeons brought over from Europe and released here in the 1600s. They were domesticated from the wild rock doves from the sea cliffs of Europe by the Romans over two thousand years ago.

Several traits have allowed them to dominate the urban landscape. Because of their history, pigeons are not afraid of people; they roost and nest readily in man made structures and they have a diverse diet. The standard pigeon has a short neck with a small head. Their short legs with the level front and hind toes allow them to perch on branches as well as walk on flat surfaces.

Male House Sparrow have black throats and chest patches, light cheeks and brown nape. The female has a plain brownish chest and dull eye-stripe. The House sparrow is the number two urban pest bird introduced as a species to North America.

The house sparrow quickly spread across the country due to its lack of natural enemies and its adaptive traits. Its ability to nest in urban structures, eat urban scraps and a large breeding capacity are some of these adaptive traits.

The House Sparrow is actually a member of the weaverbird family and not a true Sparrow. Weaverbirds create intricate nests and relative to their size, the largest nests in the bird world. Their legs and toes are favored for branch perching and their short conical bills are ideal for seed cracking.

Their diet consists of seeds and grain, as well as fruits, vegetables, human table scraps and insects. They are boisterous, intelligent birds who roost in noisy flocks on branches of city trees, ivy covered walls and under eaves of houses.